Even before the microcomputer boom in Europe, enthusiasts were using computer kits that they were assembling themselves. This avant-garde of eight-bit computing seemed primitive compared to popular home computers. However, it was little known computers such as the Sinclair MK-14 that inspired the first bedroom-coders. This post however is about a different computer, unknown on the West, forgotten on the East - MIK CA80, early Polish mikrocomputer.

The history of modern PCs begins in 1970 when an Italian engineer, Federico Faggin, becomes an employee of Intel. This Gentleman developed the four-bit Intel 4004 processor and is the co-author of the ancestor of today’s processors - the eight-bit 8008.

In 1974, Federico Faggin leaves Intel and founds Zilog. In July 1976, Zilog releases the Z80 processor, which we remember from machines such as the Sinclair ZX Spectrum, a clone of this processor was used in the Nintendo Game Boy. Interestingly, the Z80 was backwards compatible with the Intel 8080. And because the Z80 was less expensive, it became widely used in other devices as well, including the memorable synth Roland Juiter-8.

Let’s go back to the 1970s for a moment. In 1977, MK-14, a computer kit released by Science of Cambridge, goes on sale. However, in Poland, the idea of a commonly available microcomputer was still far from being implemented. Apart from the terrible economic conditions, political difficulties also were an obstacle. In December 1981, martial law begins in Poland, resulting in an embargo on Western products.

In such unfavourable conditions, a Polish engineer, Stanisław Gardynik, decided to design a computer kit that could be assembled by an amateur electronics who were “unfamiliar with Ohm’s law”. The computer was intended for educational purposes, it was also designed to be used in the construction of prototypes of electronic devices. Its design uses components available in the Eastern Bloc countries, including the U880 processor, which was a German clone of the Zilog Z80. The computer was called CA80, the kit was produced by Polish company MIK. The kits go on sale in 1984, together with ten booklets introducing amateurs to the world of programming and electronics. 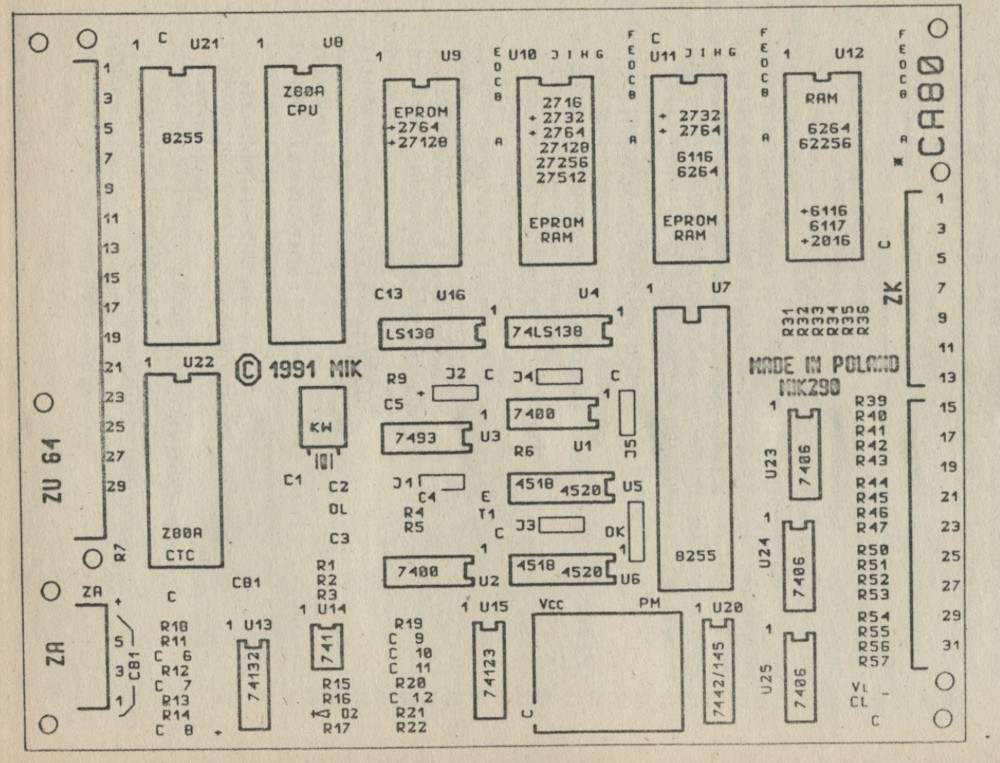 Among other things, booklets included listings of three versions of the “operating system” of CA80, a program called “monitor” takes only 2 kB in its basic version. “Monitor” made it possible to write and run programs, save data on an audio cassette, view the contents of the memory. The more extensive versions of the “monitor” (four and eight kilobytes) contain more commands. The other booklets covered the basics of electronics, assembly programming, and instructions for self-assembling of the CA80.

It was possible to expand the CA80 by soldering additional RAM chips.

The 1984 version of CA80 did not have a housing. In 1990, a new version of the computer was released, with double-sided plates and a calculator housing.